The story of Mount Fair Farm is a colorful thread in the fabric of the history of Albemarle County, the Commonwealth of Virginia and the new nation that emerged in North America at the end of the 18th century. It is a story of the family of Benjamin Brown who took possession and settled this land and farmed it over 4 generations between 1743 and 1925.

The History of Mount Fair Farm

The story of Mount Fair Farm is a colorful thread in the fabric of the history of the new nation that emerged in North America at the end of the 18th century. It is a story of the family of Benjamin Brown who acquired and farmed land in the foothills of the Blue Ridge Mountains, over 4 generations between 1743 and 1925. Even though the story of Mount Fair Farm began on the remote outer periphery of the British Empire, its establishment and continuous operation for more than 275 years illustrates how those who lived and worked here were in many ways contributing participants in global phenomena that shaped their world and ours.

Our Lens
The history of Mount Fair Farm is easily imagined when one visits the four remaining structures, constructed between 1799 and 1848, and the two graveyards which hold the remains of the individuals, both named and unnamed, who lived and worked here.

The Brown Family cemetery holds tombstones inscribed with the names or initials of: 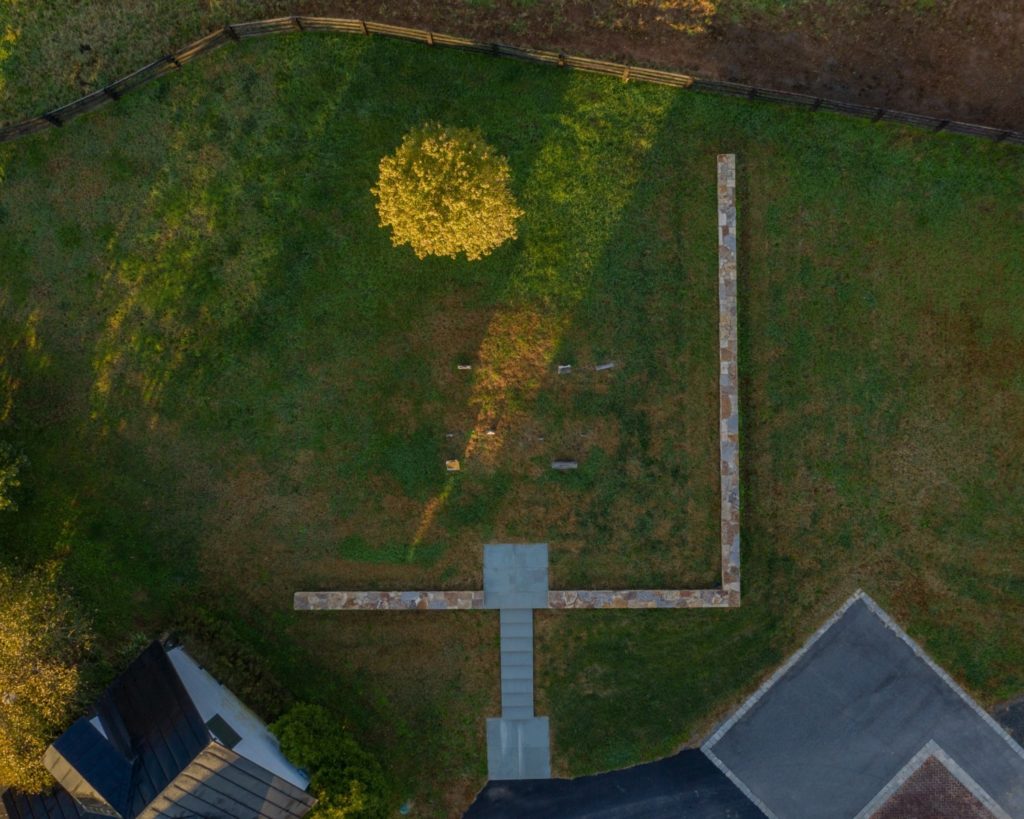 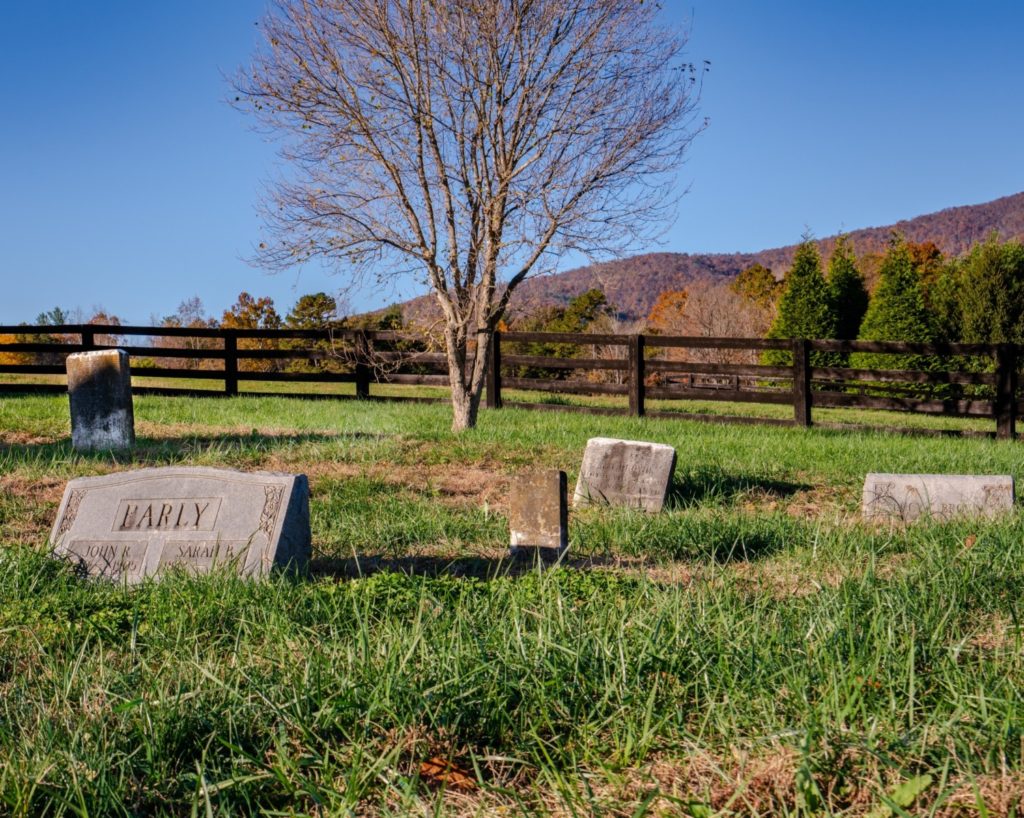 While the story which follows is woven around these names and their family members, it is important to note that many unnamed individuals contributed to the development and richness of life at Mount Fair — the enslaved community.

The graveyard for the enslaved, once hidden from view in a thickly wooded forest, has been meticulously restored, by the current owners, and features over 120 individual graves and 150 unmarked gravestones. Their role in the development both of Mount Fair and of our nation, has been memorialized in a bronze plaque placed at the entrance of the restored cemetery.

“We know neither their names nor their circumstances but imagine they lived honorable lives during a period of our nation in which equal human rights were not extended to all people. Our hope is that this monument will serve as a reminder, to all who visit, that many suffered unfairly during the formative years of our nation and that we must forever strive to ensure that past mistakes are neither forgotten nor rationalized; furthermore, that we carry forth with an understanding that the pursuit of an equal and fair society requires constant evaluation and improvement.” 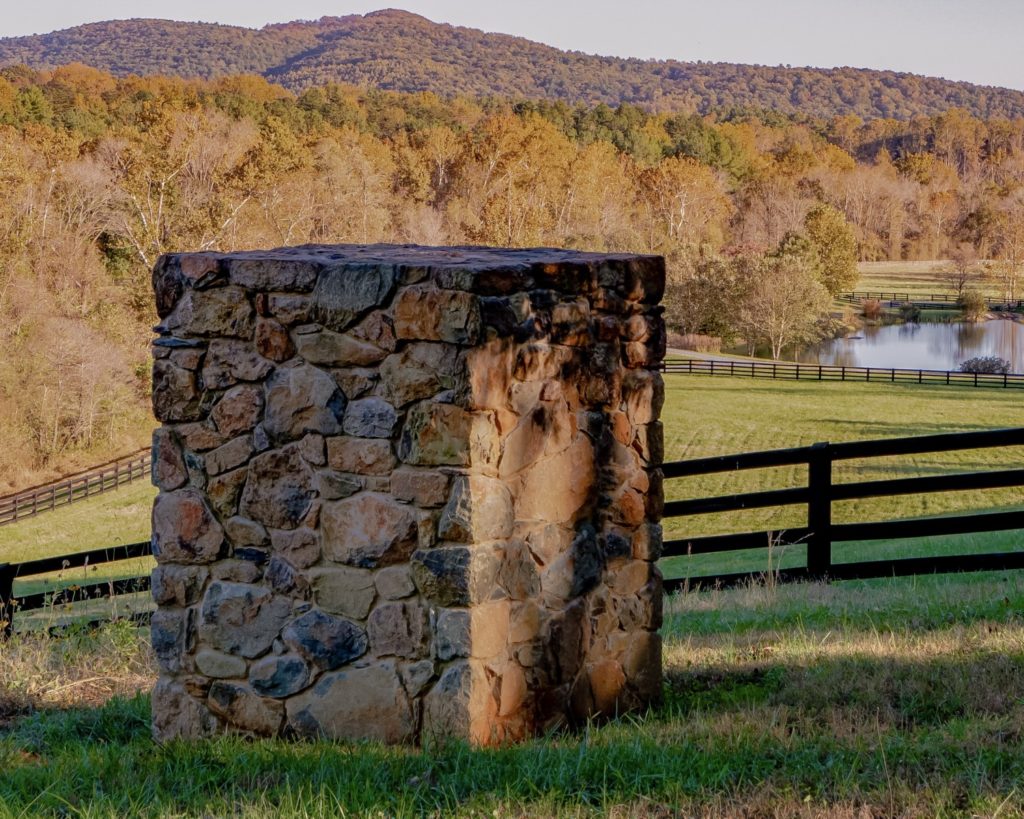 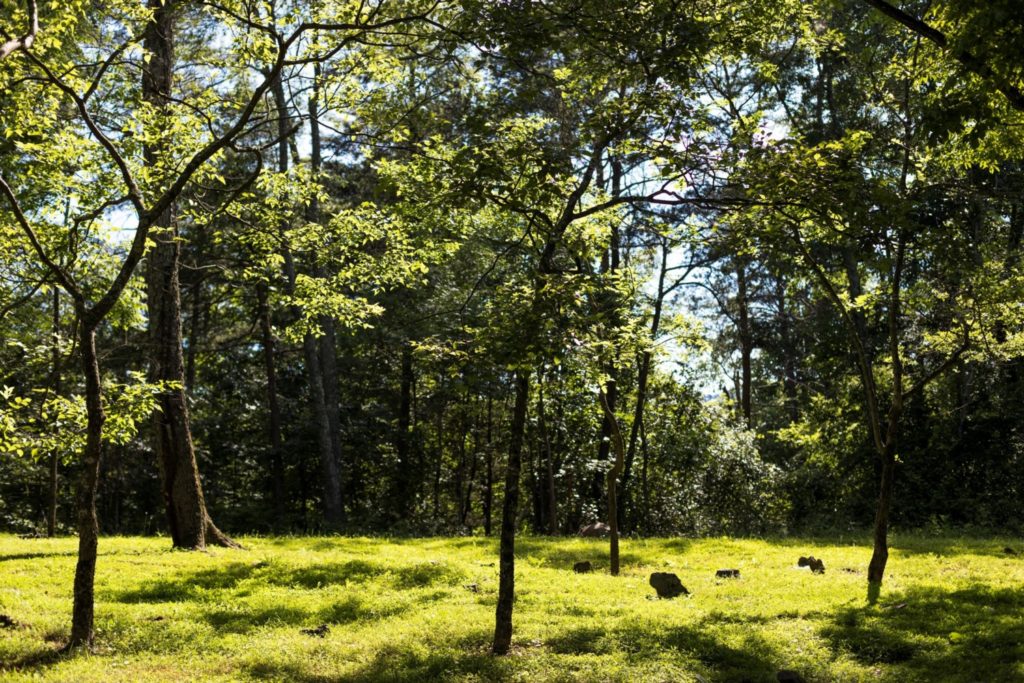 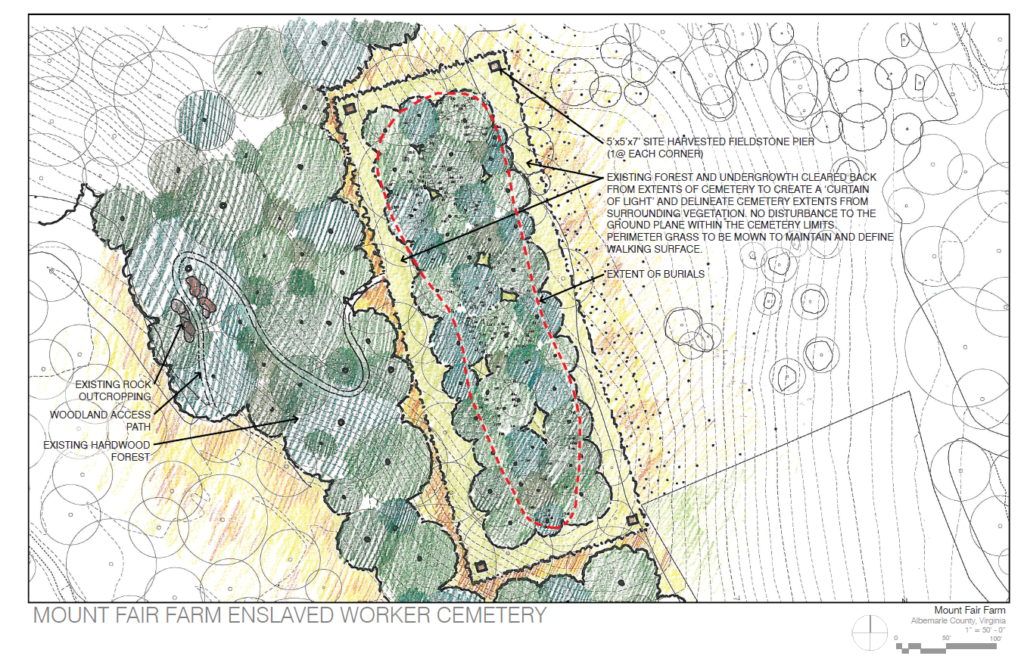 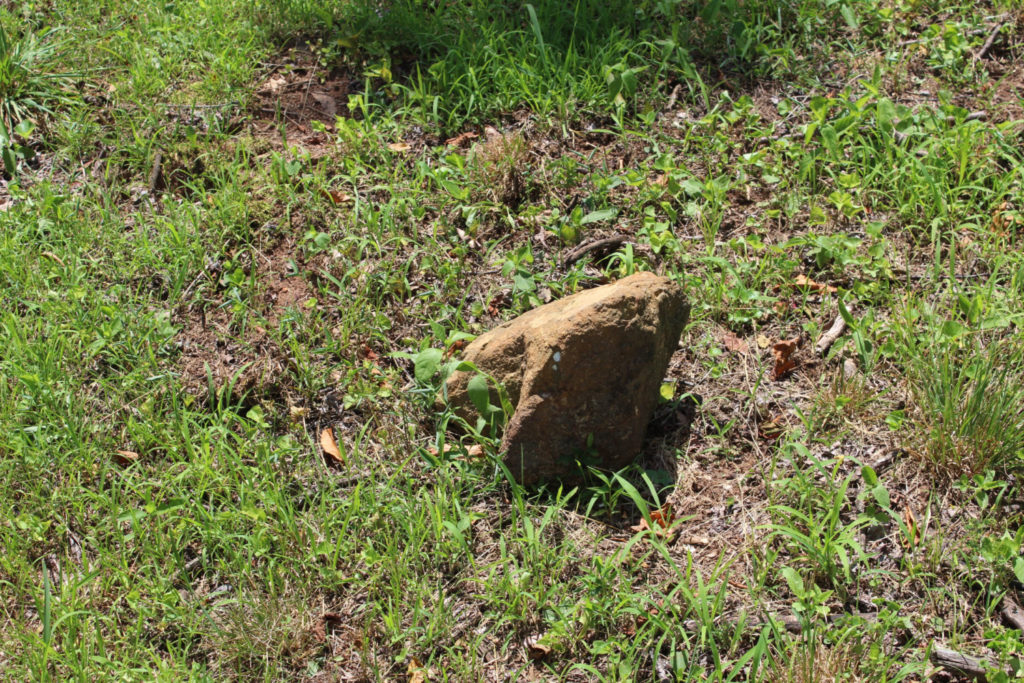 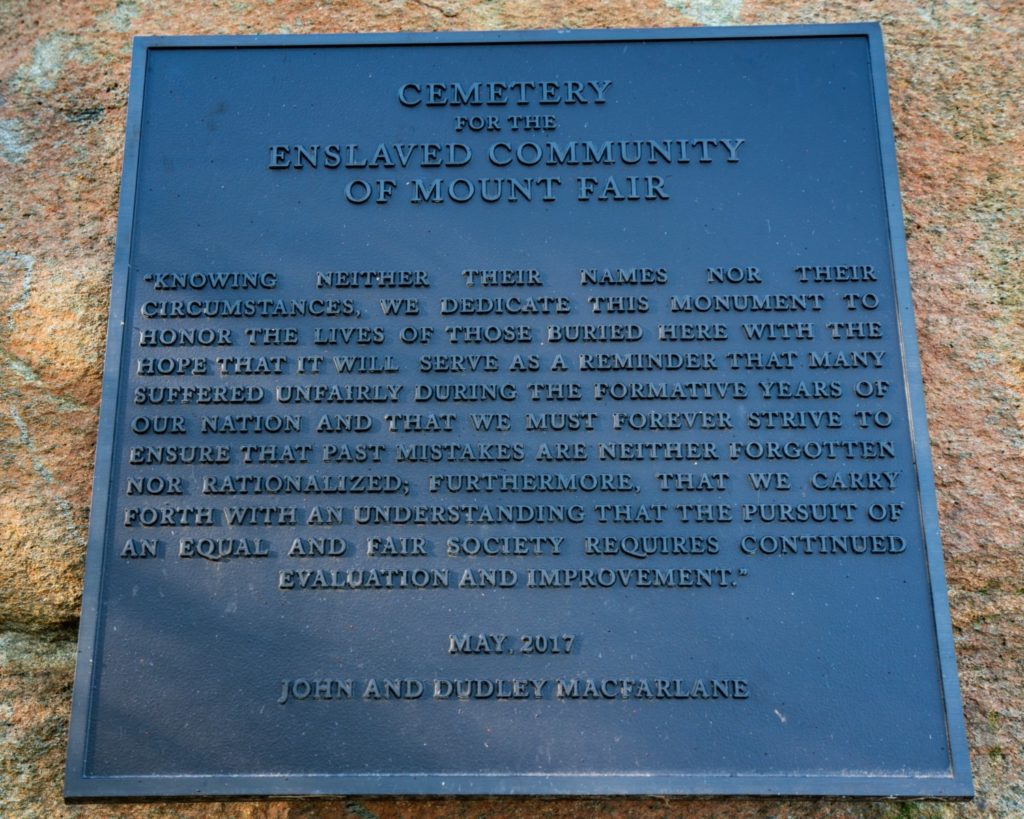 Arrival of the Browns from Tidewater*

British colonists exhausted the soils of eastern Virginia through extensive tobacco cultivation by the early 18th century. As such, colonists began moving up the rivers from the Tidewater, arriving in what is today Albemarle County in the 1720s. The James River and its tributaries served as important links of commerce with Richmond and Great Britain at a time before well-kept roads facilitated overland travel.
Born in 1690, Benjamin Brown was raised in Hanover County, Virginia. After surviving the death of his first wife, Brown remarried and looked westward for a new home for his new bride, Sarah Thompson, and his three adult children. In 1743 Brown acquired 2,850 acres along Doyle’s River at the foot of the Blue Ridge Mountains. This tract, coupled with additional purchases, amounted to over 11,000 acres, eventually became known as Mount Fair Farm. At the time of Brown’s arrival, the farm was on the periphery of colonized America, and the family frequently brushed shoulders with hospitable Native Americans during the early years of the farm’s history.

Early Days of Mount Fair: A New Nation and the Development of the Land

Following Benjamin Brown’s death, there was a distribution of lands and other property among his heirs. Brown’s son, Bezaleel Brown, came into possession of the “Bear Cornfield.” This property included the future site of Mount Fair.
During the Revolutionary War, Bezaleel rose to the rank of captain during his service in the Virginia State Militia. Bazaleel was present when General Cornwallis ended the war by surrendering to George Washington at Yorktown.

Following the war and Virginia statehood, Bazaleel became a prominent citizen in Albemarle County. He constructed a house in 1790 on the site of the main house at Mount Fair and acquired substantial grazing land on Pasture Fence Mountain. In 1791, Bazaleel was appointed magistrate of the county, and he later served as sheriff from 1805-07.

Bezaleel Brown died in 1829, leaving Mount Fair, then comprising 870 acres along both sides of the Doyle’s River, to his son William Thompson Brown. By this time, the Brown family had established a diversified enterprise producing market ready goods from raw agricultural and forest products in their own mills and shops. These included hogsheads of tobacco, wool and flax for textiles, cereal grains for human and animal consumption, dairy products, sawn lumber and finished wooden products including hogshead barrels for their own use and furniture. The family had created thriving settlements on nine adjoining plantations from several thousand acres of raw, undeveloped land on the frontier.

Bezaleel’s son and heir William Thompson Brown lived at Mount Fair for 47 years from 1829 until his death in 1876. During his lifetime, three of the four remaining structures were built. In 1836 a smokehouse was built for the purpose of processing and sale of commercial quantities of swine into the market. An Ice House was built in 1841 to refrigerate dairy products before shipment, using ice collected from the nearby Doyle’s River. By the 1850s, William was farming 650 acres of improved land to produce wheat, corn, oats, flax and flax seed, butter, beeswax, honey, vegetables, potatoes, and tobacco. The property was host to a litany of animals including grazing sheep, beef cattle, milk cows, oxen, horses, and swine.

Fire, the Rebuilding of Mount Fair and continued economic growth:

Sometime between 1845 and 1847 the original house at Mount Fair, built in 1790 by Bezaleel Brown, burned. William rebuilt it on the same site but larger and in the Greek Revival idiom. When completed the main house at Mount Fair was a fine example of high style architecture, generously proportioned, elegantly finished and appointed, demonstrating beyond any doubt that William T. Brown was a successful, sophisticated, and very wealthy planter.

With the advent of the railroad it was now possible for William to enter the cattle market. Surviving receipts of products purchased for the farm including sacks of salt and brown sugar indicate that William was processing hams in a serious way. Such products would have been bound for the Richmond or Charlottesville local markets.

After the breakout of the war Bezaleel Garland and his brother James William enlisted to fight for the confederacy. Bezaleel Garland was wounded and captured at Gettysburg. Bezaleel would remain in union custody until the end of the war. He returned to Mount Fair following his release, but he died a mere six weeks later at the age of 28 in July 1865.

The southern economy was devastated by the years of war, and the physical destruction of property during the course of the war. However, the Brown family operations escaped destruction and their gristmills, saw mills, blacksmithing shops, woodworking shops and other facilities were unharmed. Due to shifting market conditions in the post-war period, the agricultural focus at Mount Fair moved away from the labor-intensive tobacco crop to more mechanized grain and grass farming and cattle grazing.

William left Mount Fair to his wife, Mary Ann, after he fell from a horse in 1876 and died. Mary Ann continued to live on the farm until her death in 1925. William and Mary Ann’s daughter Sarah, married John Richard Early. Sarah and John Richard Early had a son, James William Early, who tended to Mount Fair with his grandmother Mary Ann in his adulthood. John Richard and Sarah Brown Early were buried side by side in the family cemetery at Mount Fair.

Beginning in 1893, James William went on to serve on the Albemarle County Board of Supervisors. He would hold this position for the remainder of his life. In 1896, He was appointed Post Master at Brown’s Cove. By 1906, James William was still living at Mount Fair, and operating a country store and post office on the property. James William had a frequent presence in Charlottesville as a member of the Board of Supervisors and was a well-known and prominent member of the business community. In 1909, he was elected to the Board of the Albemarle Mutual Telephone Company.

In 1921, James William died, and he left his estate to his wife Willie May Coiner Early. In 1930, the farm left the Brown family’s hand when Willie May and W. B. Bibb sold Mount Fair to Professor Edmund S. Campbell. Mount Fair served the Campbell family as a country retreat until 1950 when it was sold to James S. Carpenter. In 1952, the farm was again sold to John Sheridan who established a vacation resort on the property called Montfair Resort Farm, which remains in operation under the management of one of Mr. Sheridan’s grandchildren. The original Mount Fair home, which is separate from Montfair Resort Farm, was sold in 2002 and, again, in 2003 to its current owners.

The Restoration of Mount Fair:

Built in 1848, Mount Fair is on the National and Virginia Register of Historic Places. It serves as the primary residence of the current owners who purchased the property in 2003 and have, since, restored the main house, dependencies and the grounds to 19th century conditions.

The main house is a Greek revival style home featuring 11-foot ceilings, six fireplaces with simple, heart pine Greek revival mantels, copper roof, original box locks from England, widow’s walk that lights a three-story passage in the center of the home, fine woodwork and moldings with bull’s-eye corner blocks at door surrounds. The original woodwork was executed by a workman trained during the building of the University of Virginia and combines Jeffersonian detail with Greek revival style. The Smoke House, built in 1836, and Ice House, built around 1841, have also been restored and serve as guesthouses, displaying prominently the building materials and craftsmanship of the early 19th century.

Both the Brown Family and Enslaved Worker Cemeteries have been restored, with the latter, once hidden from view, now prominently and permanently marked at each of the four corners by seven-foot tall by seven-foot square columns constructed of local fieldstone. A grass lawn runs between the columns, serving as a boundary, filled with the daylight sun. A five-acre wildflower meadow has been planted on the eastern border of the cemetery, believed to be the direction in which the graves are facing.

*This history is derived from studies conducted principally by Dr. James B. Kiracofe, founder of the Inter-American Institute for Advanced Studies in Cultural History. Commissioned by the current owners of Mount Fair, Dr. Kiracofe researched the family of Benjamin Brown and their life in Brown’s Cove, all in the context of domestic and global economic and geopolitical events. Through the lens of one family’s experience, his paper, which is far more extensive than what is presented here, provides unique insight into the cultural, economic and political development of the United States of America. Kara Levis, who managed the farm’s equestrian activities for several years, was also a contributor to this history.